OLD MODEL, THIS MODEL IS SUCCEED BY GALVA-WISP MARK II

The Wisp628 from www.voti.nl is an In Circuit Serial Programmer to program a flash PIC which mostly can stay in your circuit.
No irritating doings like pulling the PIC out of the PCB, place it in the programmer, programming it, pull it out the programmer and place it back in the PCB, over and over again, it can stay in your breadboard or PCB while programming the PIC.
It becomes risky when the PIC is connected direct to 230V main, like the wireless controlled (and trafo-less!) dimmer from this site, then it's better to program the PIC separate from the circuit.

Galva-Wisp
Another solution to protect your PC is to isolate the Wisp628 programmer galvanic from the PC (see schematic diagram underneath) or to build the Galva-Wisp, that's the Wisp628 but galvanic separated by 2 dual-optocouplers.
The Galva-Wisp is expanded with a green power on LED, a red program LED and a pushbutton for the possibility to reset the programmed PIC manual.
By the way, the manual reset is only possible when MCLR is enabled. (CONFIG MCLRE_ON in PIC-Basic (=default)) 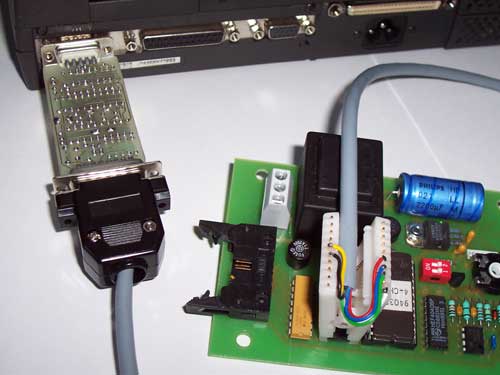 Here the Galva-Wisp PIC programmer is connected direct into the COM-port from a PC.
Ofcourse you can use a (1:1) cable between the COM-port and the programmer. 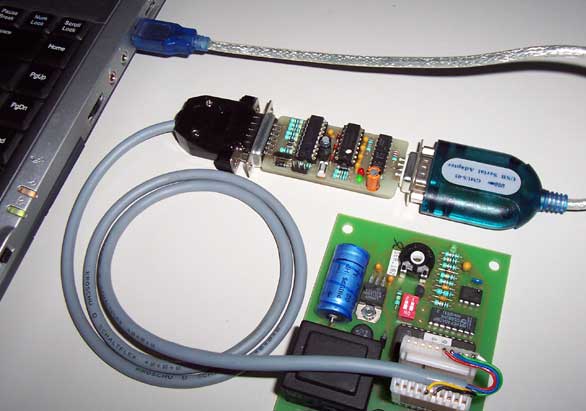 Further is the Galva-Wisp the same as the Wisp628, it can program till now the next PIC-types:

Notes:
- Writing ID memory is not supported for 16F7x.
- Chips that are shown in grey are supported conform Microchip's programming specifications, but have not been tested with a real chip.
- Although not explicitly mentioned the LF (low power) variants of the mentioned chips are also supported.
- Programming chips that can configure their /MCLR pin as input can (especially when this feature is used) requires an additional circuit. 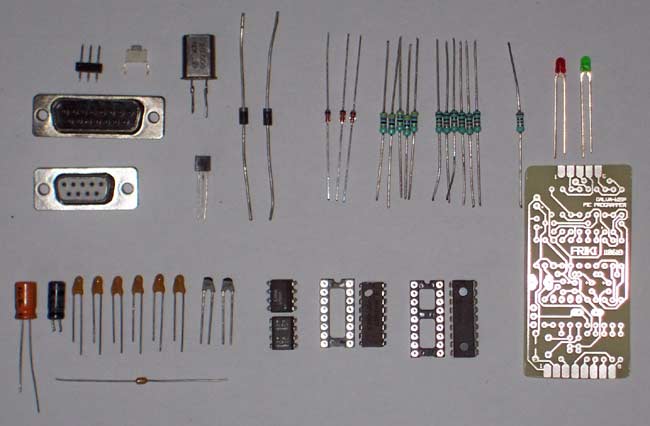 The components: the 3-pins header and the reset push-button can leave if not used.

C11 is mounted on the inside of the IC socket under the PIC.
Pay attention for the wire connected on pin 7 from the 9-pole sub-D connector

Beware that the 2 optocouplers (IC3 and IC4) are mounted with the indentation to each other.
The diode D5 must be a Schottky diode, for example type SB140.
C11 is mounted in the IC-socket under the PIC.
The PIC must placed anyhow in a socket so that these from time to time can be replaced with new software so that the newest PIC types can be programmed.
Updating is possible by programming the update in another 16F648 first and then replace the PIC (IC1) with it.
You can re-program the 'old' PIC for another project.

Additional circuit
Some PIC's (like 12Fxxx and 16F630/16F676) can configure their /MCLR pin as input.
These chips will (in most cases) fail to get into programmingmode when the /MCLR pin is indeed configured as input.

Giving Vpp a fraction before the power from the target PIC is active solve this problem.
The Galva-Wisp shorts the target PIC's power very briefly (a few milliseconds), while the /MCLR pin goes to Vpp.
Schottky diode D5 and big capacitor C5 (1000µF) ensures that the Galva-Wisp still has power during this brief period.
It's important that the 2 LED's are a low current type, else capacitor C5 is to small.
The LED's burn with resistors R9 (3k9) and R10 (1k8) not very bright, because of currentsaving when programming.

In any case the power to the target PIC must tolerate this brief short, it must not deliver more current than the TIP120 darlington transistor can handle (a few ampère) and it must recover fast.
A 7805 or 78L05 based power supply will do fine, some lab power supplies will not, because they are designed to 'fold back' after an overcurrent situation and recover slowly.
In such cases a 10Ω resistor in series with the power supply might solve the problem.

Note: Choose a radial low-voltage (6,3V or 10V) capacitor for C5 else it doesn't fit on the Galva-Wisp PCB.

The TIP120 is not placed on the Galva-Wisp PCB board but must mounted in the 15-pole sub-D connector.
Cut the upper metal part from the TIP120, then it will better fit in the connectorhouse.
The TIP120 is connected between pin 1 (GND) and pin 2 (+5V) from the connector (see little scheme).
Notice the resistor from 1k between the basis from the TIP120 and pin 7 from the connector.
On this cable is an 8-pin DIL clip mounted, because the transistor is only necessary with the small PIC's.
For the bigger PIC's I have another cable with an 18-pin DIL-clip, but without the TIP120 (not necessary there).

Realize that the galvanic isolation is between programmer and PC and not between programmer and the circuit, so if you program a PIC which is connected to the mains (i.e. a dimmer), then parts of the programmer are under life line too!
Be sure what you're doing when you program PIC's which are connected to this dangerous voltage, the Galva-Wisp is pure for protection from your PC (also when programming with experimental circuits without high voltages).
Further is the Galva-Wisp the same as the Wisp628 from Voti.
For very extensive information about the Wisp PIC programmer, the .HEX file for the 16F628(A) (IC1) and the XWisp software for on your PC, click here.

The Galva-Wisp works only with XWisp, but will soon work also with Bumblebee.

If you program PIC's with the Galva-Wisp (or Wisp628) within the Proton PIC Basic V3.0 IDE (F10 key), you need the file XWisp.com, because Proton IDE doesn't accept the XWisp.py file.
Place all the XWisp files in the same folder as where you have your Python files and place there also XWisp.com, which you can download here.
By programmer filename in Proton IDE place the name XWisp.com.